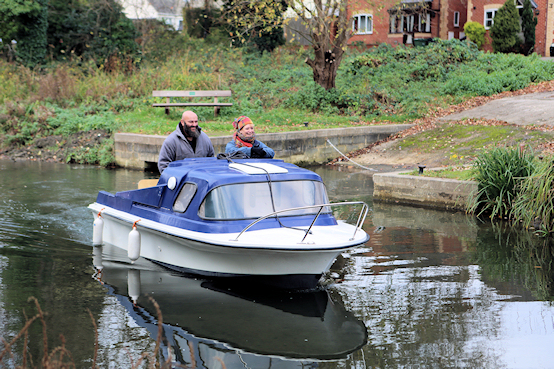 Please note that the canal is still undergoing restoration and some lengths are not available yet and those that are may not be fully completed and use may be restricted by ongoing work.

The canal is usually navigable with care from The Ocean near Stonehouse to Ham Mill Lock about 2Km east of Stroud, a distance of 7.5Km with 7 locks (one double).

Dredging is taking place upstream of Ryeford Double Locks a mile west of Stroud. This will be ongoing from September 2018 to at least the Summer of 2019. A new water supply is in the commissioning phase at Gough's Orchard to supply the western side of the T&S Canal. This, plus the completion of Ham Mill Lock, should see a further 1km added to the length described above during the latter stages of 2019.

Many of the boat landing stages for the locks and movable bridges are in place but a few are not so care is needed. All will be completed by the end of 2019.

There are still a small number of shallow pipe crossings running across the canal, the worst being a main sewer about 100m below Wallbridge Lower Lock which limits the draught of boats to about 500mm - this is expected to be removed in 2019/2020.

Use of the canal is entirely at the user's risk.

From Wallbridge Upper Lock to Ebley New Weir, a distance of approximately 1.5km, the canal shares its water with three streams that join at Wallbridge, Lodgemoor and Dubridge. The river water leaves the canal at Ebley New Weir when the navigation returns to canal only. After periods of heavy rain and potential flooding, extra care is needed to navigate the river section as the flow of the river may be considerably increased and the depth may rise unexpectedly. For this section of the navigation we need to follow strictly the rules for rivers laid down by the Environment Agency and this section is also subject to increased siltation as the fast flowing streams enter the relative slow pace of the canal, lending itself to encouraging material previously in suspension dropping to form silt.

In particular, boat landing stages have yet to be installed in several places and single handed navigation is not recommended at this time.

The slipway at Strachans Close currently provides the only access for trailerable boats into the navigable length of Phase 1A. This is quite a steep slipway. The key needed to unlock the slipway chain and unlock some of the other padlocks along the canal can be borrowed by arrangement. The same key will unlock the Ryeford Swing Bridge and some of the other structures and paddle gear locks but these locks are likely to be changed to the (BW) Watermate type at some point. All other key operated structures use the standard Watermate key.

In the Phase 1B length, both Blunder and Newtown Locks at Eastington are usable with care and accessible via the Eastington slipway above Pike Lock - please return the heavy stop plank into position after use. Please note that there is a pile of underwater debris in the Eastington Slipway on the left hand (upstream side) - for best results, use the right hand side. Recent volunteer work has removed fallen trees and branches but Bond's Mill Lift Bridge is currently inoperable and weed in the summer can sometimes be an issue.